What creature could captivate our hearts more than Simba in Disney’s The Lion King? But what if this lion cub was an extraordinarily pure white? What if he was considered an angelic messenger from God? And what if you discovered one was born on Christmas Day 2000 in a place called Bethlehem? More importantly what if this was not some new Pixar production but real life emerging from the ancient myths of the dark continent? 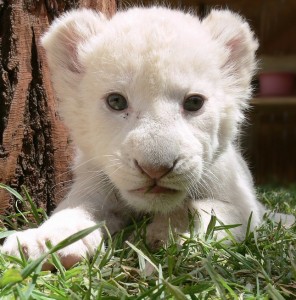 According to African mythology these sacred White Lions are born on our planet only in times of great ecological crisis and only in one specific area in Africa – Timbavaati. Close to Kruger National Park, South Africa, it’s name means ‘the place where lions came down from the stars’ and is a place full of of star energy according to one of the last Lion Shamans, Credo Mutwa. Held as deeply sacred land, it also lies on the magical Nilotic Meridian linking up with Great Zimbabwe and The Sphinx all the way north on the Giza Plateau in Egypt.

Bethlehem sadly is not in the Timbavaati region. It is between Johannesburg and Durban and is host to a canned hunting farm, where these magical lions are bred to take pride of place at the top of the menu demanding the highest price for a bullet.

‘If you kill a White Lion, you kill the world.’* African proverb

Now there may be a few hundred of these beauties in captivity but only 13 living wild in their natural habitat. There would possibly be none at all if it wasn’t for Linda Tucker. She is another rare breed – a person who can leave behind a successful career in fashion and advertising in London to move to South Africa to become a ‘lion heroine’ and the most committed of White Lion advocates.

Her introduction to White Lions was one of those ‘from the jaws of death’ scenario’s which became a pivotal point in her life. While relaxing on safari at Timbavaati back in 1991, one of their group, a game ranger, shared with them his thoughts that a white lion cub may soon be born there within a pride of tawny lions. Later that very night after dark, the roars of the nearby pride changed to those which heralded a possible birth. Thinking they may witness the rarest of rare – a white lion cub moments after its birth and almost a decade since the last one was seen, the group jumped in to the open game-viewing vehicle and bounced across the reserve – right in to the middle of a large group of twenty four exceedingly affronted lions. As the headlights lit up pairs of gleaming angry amber eyes the steering column promptly broke. No mobile phones worked. The battery was dying in the torch. Only 4 bullets were in the rifle. The vehicle was completely open. No one knew they had gone. It was night.

The eight of them had pretty well handed themselves over as dinner. The lions circled. It was 8.15pm.

What thoughts would you have in a situation like this? No way to stay protected. No way to go and get help. No way any help was going to come. Not through any orthodox means anyway…

As time passed each one of the group was certain their time had come. The lions became more agitated with each passing minute, moving in ever closer. And then something happened. Something you could never dream up….

Through the middle of the lions, walking slowly and stately, came an old woman with a baby on her back, a young girl and a young man following behind. In a state of trance they climbed in to the vehicle.  A strange stillness came over the pride. All of a sudden Andries, Linda’s sisters boyfriend suggested he go with the young man who had just arrived and get help. Disappearing on foot in to the dark they were left untouched. A while later help came out to bring them all to safety.

Linda Tucker never got over this extraordinary experience. It was three years later and a ‘burnout’ which prompted her return to Timbavaati. Like a hound to the scent she followed her nose to ask questions. It was a challenging journey to understanding. Linda had always been a rational academic and yet now that solid shore receded as she began to understand how a small group of apparently vulnerable individuals could walk through a provoked pride of lions in the dark only a matter of hours after one of them had given birth. Not only had they allowed them to enter their domain, they had allowed two of them to walk out on foot.

It was Maria Khosa, a powerful Sangoma also known as The Lion Queen of Timbavaati, who had walked through the lions that night. She had intuitively known Linda’s group were out there and needed her help. She explained how she spoke with the ancestors and through this dialogue was able to move at will among the lions. Throwing the bones for Linda she also foretold the vital part she had to play in the unfolding magical tale of these lustrous white creatures. She called her The Keeper of the White Lions.

Credo Mutwa, the Lion Shaman, shared much of his White Lion wisdom with Linda. This humble man had made himself a pariah many years back when he chose to share the oral history of Africa with the world, believing this sacrilegious act was necessary in our present turbulent and destructive times. He said;

‘The White Lions of Timbavaati, the lions of the star that fell to earth, must not be allowed to vanish from the pages of our country’s history,’

‘they are very old beings – as old as time itself.’*

Linda, over a period of years, continued to explore the mythology of the White Lions and learn about their presence in the world today. She got in touch with a genetic expert who explained that pure white creatures would be albino as this level of white was more of an absence of colour. If they were albino their eyes would be pale pink. They’re not. It seems that these lions are magical even in the factual sense as this apparently ‘defies the normal rules of genetics.’

Their ability to survive in the wild was also in question. Tawny lions blend well in their environment making hunting that much simpler. And yet, even though the White Lions coat can reveal their whereabouts they are phenomenal hunters – the apex of apex predators.

Following an intuitive trail Linda was told that a female white lion was calling her from spirit and would be born somewhere significant. How would she find her? She’d be given a sign. When she heard that a female white cub had been born in a canned hunting camp in Bethlehem on Christmas Day in the year 2000, she knew this was the sign she’d been waiting for and set about saving her from being killed by a hunters extortionately priced bullet.

This lion cub whose arrival was predicted by prophecies, was named Marah meaning ‘Mother of the Sun God’ and considered the most sacred animal on the planet at that time. Through Linda’s exceptional work and commitment she managed to save Marah after five years of campaigning and fund raising. She was found a home, with her three cubs, on the edge of Greater Timbavaati.  Two years later she sadly died at Easter time, but not from any human intervention.

Marah’s lineage slowly increases and it is up to us to make sure these sacred creatures are cherished. If they can step out of the annals of mythology maybe we should take note of their messages. 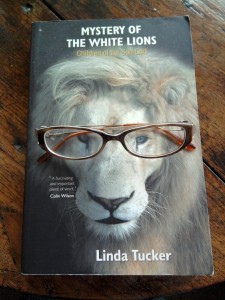 Mystery of the White Lions

You can find out more about the White Lions at www.whitelions.org which is the website dedicated to the Global White Lion Protection Trust set up by Linda Tucker. The Trust is not open to the public however there are a number of very small tours you can join and donate to the upkeep and safety of these remarkable and mystical star beasts.

*Most of the information in this article was derived from The Mystery of the White Lions – Children of the Sun God by Linda Tucker.