Warning: Use of undefined constant W3TC_POWERED_BY - assumed 'W3TC_POWERED_BY' (this will throw an Error in a future version of PHP) in /home/out3rtr4v3l5/public_html/wp-content/plugins/google-webfont-optimizer/google-webfont-optimizer.php on line 342
 A random and unusual gift travelling through Ladakh in India, with Sheela - Spiritual Tours,Sacred Journeys & Transformational Retreats Skip to content

A random and unusual gift travelling through Ladakh in India, with Sheela 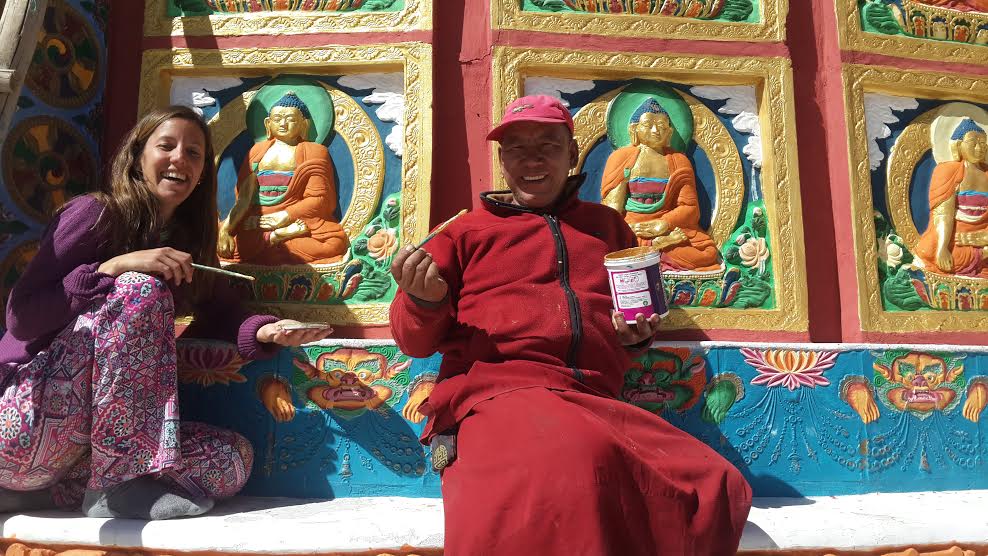 It was one of my last days in Leh-Ladakh. I thought that I already had all that Ladakh could give to me, that it was way more than I could ever imagined… but that´s for another time.

I decide to take my yoga mat and go up to Shanti Stupa, a big and beautiful stupa built on top of a hill in Leh, one of the most amazing views to the valley. People told me I can go to the temple and do my yoga practice on the wooden floor, so I go, climbing those long steps very slowly at +3500mts altitude.

Before going to the temple, I need to see that stupa again, maybe for the last time in that trip. Something unusual is happening there… I see two buddhist monks and a ladakhi man painting small details in the stupa, and it looks like they are having a good time there. I look very curious at the scene, so soon after they tell me they are doing maintenance of the Buddha figures on the stupa, one of the monks asks, “do you want to paint?”. That was Lobsang.

I had to climb the stupa to paint, it was a bit high on the top of the hill. Lobsang starts teasing me, and then I realise this is his way. “Why are you doing yoga asanas? Are you planning to get enlighten doing postures?”.  I replied that is good for my body and my mind -that’s what I understood about yoga at that time. But Lobsang kept provoking me between painting and chai, saying that good health and good mind comes from good thoughts.

Its lunch time and religious people know how to enjoy rest time. Lobsang says “come on, let’s have lunch”, so we go to the kitchen and keep talking while we chop veggies. Lobsang is having a fun time teasing me and I’m quite confused. I didn’t expect a buddhist monk triggering me on purpose.

He finds the right moment to ask me “who is Sheela?” and I give a reply. Then again and again until I don’t know what else to say. I kind of realise I don’t have a meaningful answer for that.  All I can say isn’t really hitting the core of the question “Who am I?”.

I didn’t know he was giving me a koan, a question that has no answer but just the question itself is an invitation to deep dive into our awareness. What a gift!

Lobsang told me the story of how one of his buddhist teachers gave him that inquiry and how he realised he had no idea. He is not a scholar, he is a simple man wearing a monk outfit talking to a stranger.

That question of Who am I started growing in me like a seed in the fertile Earth, till it became the moto of my life, it has no end, its infinite as existence itself. I was open and thirsty for that kind of knowledge – the type you don’t get from a book or a class, only by yourself.

I can’t explain the beauty of Ladakh, of those high peaks and valleys of contentment, connection with the earth and the sky.  That vast sky day and night inviting you to melt with it, feeling one with all.  Such a unique atmosphere.

The idea of taking people on tour started here in Ladakh out of the overflowing gifts that I was receiving from it. It is a dream that this abundance reaches new seekers, other thirsty people open to let Existence unfold onto them and shower its blessings.

Guest writer Sheela is a meditator and therapist working with people through life transformation as she travels the world. She is also the co-creator and host of Himalayan Odyssey, a 21 day spiritual journey through the Indian Himalayas from the 2nd to 23rd September 2017.

For more info on this journey visit http://outertravelsinnerjourneys.com/spiritual-retreats/himalaya-india-tour/ 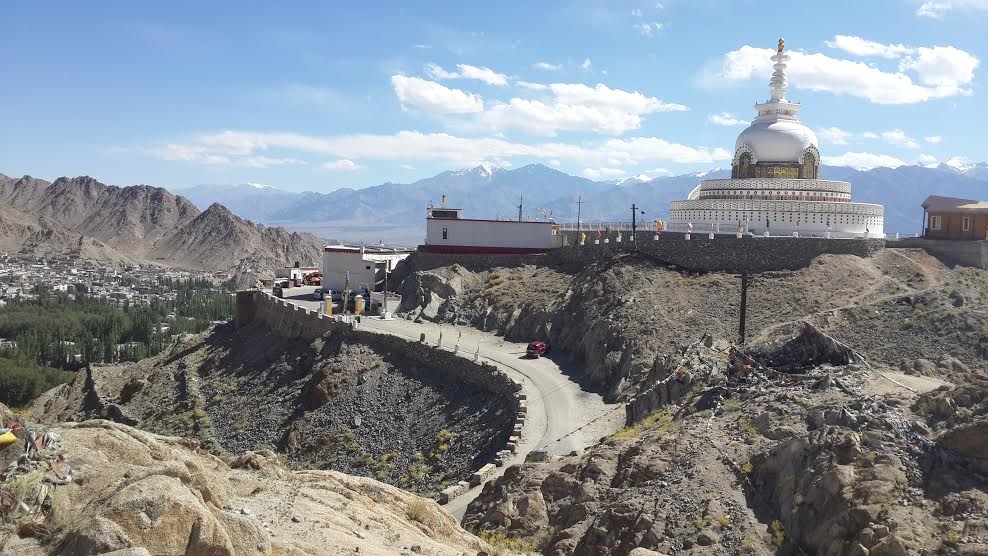