We’re In The Jungle Baby!

‘I’m in the middle of the Amazon Rainforest in a big thatched hut with a revered shaman doing ancient rituals – wow, it’s mind-blowing.’ Mary Gamberg, one of our group.

It was one thing walking in to Kapitari, our home for a week in the Rainforest, but another thing altogether walking out. The rain had been heavy for the last few days, well all week really, which had made the twenty minute walk along the muddy track far more challenging. The orange clay mud sucked at our feet, insisting we leave our shoes or boots behind. When we didn’t it simply hung on to us for dear life, adding several extra kilos to the ends of our legs, and making this a powerful workout! Half way through I wanted to lie face down in the mud and give up, but as the weakling of the group I had received my own faithful man-servant who made sure I stayed upright. Meanwhile the porters hefted our suitcases on their shoulders and made light weather of it all. I tried imagining I was Legolas the Elf in Lord of the Rings, able to step lighter than a feather upon the ground, but to no avail. 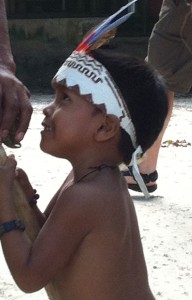 Little Boy From The Nearby Bora Tribe

The tall trees, palms and massive undergrowth reduced in size as we got closer to our boat almost as if they didn’t want to show their true greatness as we approached what’s considered civilisation in these parts. Although I’m sure there is an argument that Iquitos, reachable only by things which float or fly, doesn’t quite come under that banner. The Rainforest symphony diminished along with the vegetation. I have loved the variety and strangeness of the sounds. One sound I loved in particular was like a cork being popped slowly and elegantly from a fine bottle of French wine!

We have bull-dozed so much of Nature and masked her with concrete that we can be forgiven for thinking we have control over her. We don’t. She may lull us in to a false sense of security but she will always have the upper hand unless we destroy ourselves in the process. In the Rainforest she is in your face – from the bullet ant known to give the most painful sting on the planet to the deluge of rain which gives the forest it’s name – you may possibly keep it all at arms length but you can’t stop it.

But I started at the end let me rewind a few days and take us back to the beginning of the end of this Peru Odyssey Adventure. Day 16 saw us fly from Cusco to Lima and Lima to Iquitos. The sky delivered the most incredibly radiant and awe-inspiring sunset I have ever seen as a prelude to the richness of our next port of call. Leaving behind the high altitudes of The Andes with their cool, dry air we aimed arrow-like for the densely humid and tropical jungle, my very least favourite of climates.

I hadn’t noticed much hurry in Peru but in Iquitos there is a loud and frenetic energy almost as if they are trying to blot out the sounds of Nature terrified their city will be reclaimed by the Rainforest and disappear overnight. Moto-kars zip and zoom everywhere – tiny open sided taxi cabs made from noisy little three wheeled motorcycles with a rickety rickshaw contraption to sit in. They are a cross between a dodgem car and a roller coaster ride! I wondered how they didn’t create pile-ups every day but the drivers must have the most honed sense of spatial awareness in the world. Terrifying and compelling in equal measure. But coming to this city from two weeks of quiet in the ancient sites and temples of the Andes is an assault and all of us were keen to get out of the city and in to the jungle. 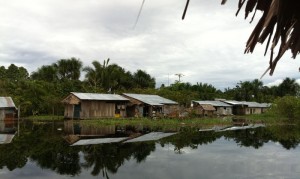 On The Way To Kapitari

A bus ride was followed by a boat ride along a tributary of the Amazon passing houses on stilts hovering over the water.  Eventually the boat pulled in and we disembarked for the walk to Kapitari. Just as I thought I couldn’t put another foot in front of the other in that heat we turned a corner and an oasis appeared. Jugs of unbelievably tasty lemonade arrived out of nowhere. A multi-coloured Macaw greeted us, a strange black bird of ample proportions with a bright orange beak huddled on a clothes line as if hatching the moist clothes underneath its belly, and a tiny squawking love bird whispered its sweet nothing welcome rather loudly (but charmingly) in our ears. We were enchanted. The sweat was forgotten for the moment. 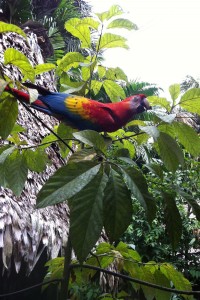 Greetings from the Kapitari Macaw

So many new things to acclimatise to in the jungle. Not least the fact we had our own rooms in cute little thatched ‘tambo’s perched above the mud. Our very own porcelain toilet a welcome addition. Slowly but surely as the day progressed towards the first of our Ayahuasca ceremonies, I got to realise how different life was without the usual accessories of technology. No wifi. No electricity, except for a couple of hours in the day when the generator runs and you can charge your phone or iPad. Minimal food as we were on an Ayahuasca diet – so breakfast and lunch was all we got, pretty small portions and more bland than I imagined bland to actually be. The only running water was cold and in the shower block. Everything was stripped back to bare essentials and we were left with what was going on in our own minds and imagination. 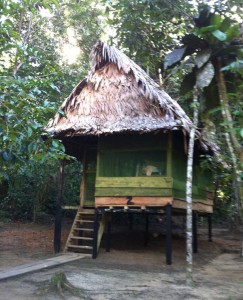 My ‘Tambo’ Home at Kapitari

Ayahuasca and sacred plant ceremonies are big business and increasing in popularity month by month. To accommodate all this Western fascination there are some unscrupulous ‘shamans’ out and about willing to take your money and brew you up a potion. I was very happy to know we were in the hands of the revered Don Luco, a pot-bellied man with gentle and infinite eyes, whose Icaros songs have embedded themselves deeply in a fold of my medial pre-frontal cortex.

Over the six nights we were at Kapitari we had four Ayahuasca ceremonies. They take place after dark between 7pm and midnight in a big round thatched hut with netting instead of walls, called a Malocca. We each had a mat, a pillow and a blanket – not that it was cold but sometimes Ayahuasca can give you the shivers. Oh yes and each of us received a bucket – to purge in! We had enough helpers inside and out to make sure we could make the toilets if we needed to, and if we got anxious about any of our experience there was someone on hand to hold the space for us.

Honesty is the best policy so here goes – there is an incredible amount of purging in various forms when you participate in a ceremony of this nature. For Ayahuasca to do her deep healing work she needs to clean you of toxins first. The idea behind the bland diet is to help ease the way but she still needs to strip our insides, mentally as well as physically, of as much as she can possibly reach. So the first two nights were spent spring-cleaning us out. This is rigorous detoxing. Vomiting, diarrhoea, sweating, shivering, crying and even laughing. My bodies purge of choice was diarrhoea, but vomiting ad nauseam (I won’t apologise for that pun!) was the most popular! This is not a ‘high’ you come on for a bit of psychedelic entertainment – this is a path of growth, of revelation, and if you’re lucky you’ll get some awesome visuals thrown in for good measure. But to get to the good bits you have to let your body be cleansed and it can be full on.

Ayahuasca – a plant medicine spirit, a Goddess, an intelligent sentient being, a powerful healer, an ally. She is Nature. This is an experience of the underlying collaboration of nature in action. She seems to know what we want and more importantly what we need…. each one of us had our own unique experiences, some more wonderfully enlightening than others. A number of us received what we came for, although it may not have arrived the way we expected it to. One man, who had chronic pain from a severe back accident about ten years ago had the most obvious healing experience. After three ceremonies he was able to reduce his pain medication by about eighty percent without any withdrawal symptoms which were usually excruciating and lasted weeks.

My favourite night was feeling totally sober and clear-headed. Walking outside on my own for the first time, usually I was debilitatingly weak, was like being a child walking for the first time without anyone holding my hand. But Manuel and Miguel, our big burly outside helpers were used to me weak as a kitten and so one took my hand regardless. All I wanted to do was dance with him in the moonlight. I sashayed and laughed my way along the raised wooden path still holding his hand high above my head to show him my balance was perfect and that I was a woman. Back inside the Malocca a torrential downpour thrummed and drummed the thatch above and the ground outside. Hard and heavy it syncopated with the Rainforest sounds – the frogs, the ducks, the crickets and god knows what else. And woven through all of this extraordinary sound was the song of the Icaros sometimes with a rattle, sometimes a flute. It was primeval and totally wonderfully unforgettably glorious. 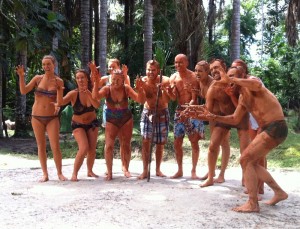 Sometimes you just have to get a little crazy!

However hard I found being in the jungle I shall miss the people and the verdant dynamic thrusting pulsating life which never gave half measures. I carry Ayahuasca in my DNA now and I am more alive because of her and her Rainforest. What an extraordinary world we live in when we step off the concrete and in to the heat and heart of our planet!

Is your name being whispered on the silky breath of Peru? I hope you heed the call if it is. You’ll meet family beyond bloodlines you never knew you had…